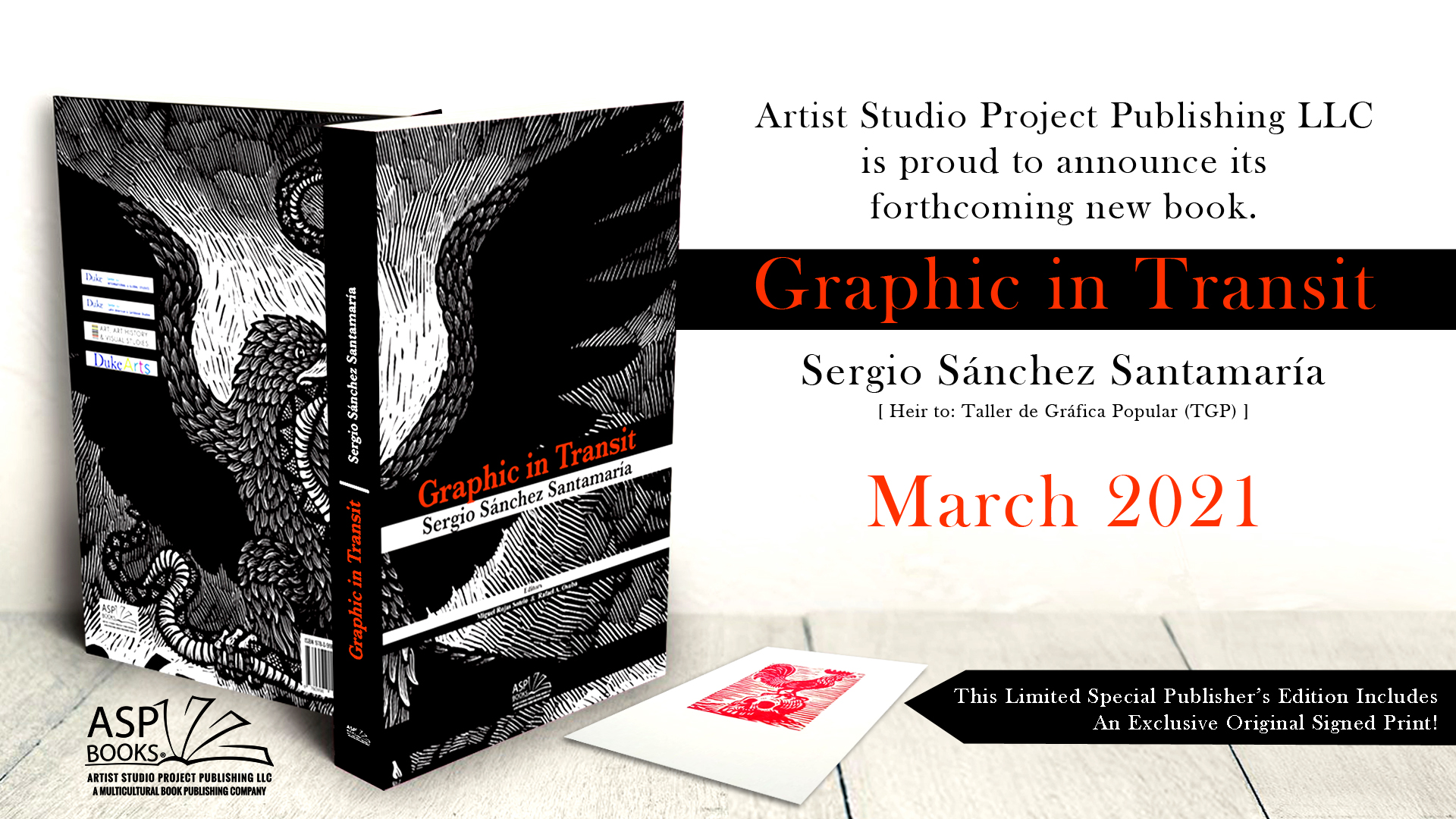 Sergio Sánchez Santamaría is the heir to the famous Taller de Gráfica Popular (TGP) in México. In the land of José Guadalupe Posada, Sánchez Santamaría carries on.
GRAPHIC IN TRANSIT response to the question of how to sustain and actualize such a legacy in times in which art has moved away from image production and the socially engaging ways of the past.

This volume presents the work of Sánchez Santamaría in a historical and critical context, next to some of the most important exponents of graphic art in Mexico and the U.S., among then Leopoldo López and Elizabeth Catlett.
Texts produced for the book by art critics, collectors, and fellow artists demonstrate the power of Sánchez Santamaría art. Sergio Sánchez is a prolific producer of images, this book counts with some of the most relevant of his two and a half trajectory.
Many of them represented in a number of important public and private collections in México and the U.S.
We are launching the book with a special limited signed original linocut print created for the volume.

You can Pre-Order your Special Limited Copy Now!

DESCRIPTION: GRAPHIC IN TRANSIT | SOCIALLY ENGAGED ART IN THE ERA OF BLACK LIVES.

Sergio Sánchez Santamaría is the heir of the famous Taller de Gráfica Popular (TGP), a powerful collective of visual artists that for decades produced art in a socially (at times politically) engaged ways in Mexico and that became known worldwide for their commitment to justice, social equality, and human rights. GRAPHIC IN TRANSIT responds to the question of how to sustain and actualize such a legacy in times in which art has moved away from the social commitment of the past. Participants in this conversation will present the work of Sánchez Santamaría in a historical and critical context, next to figures such as African American artist Elizabeth Catlett and Leopoldo Méndez among others. This event also marks the launching of the book of the same title, which presents texts produced by art critics, collectors, and fellow artists introducing to the American audience the work of Sánchez Santamaría.

“As a lover of Mexican culture in general and of the TGP in particular, I am delighted that Sergio Sánchez Santamaría is carrying on their great tradition.”
Robert Healey, collector.

“The work of Maestro Sánchez Santamaría has a clear ‘classic’ air, so to speak. He immediately remembers the best of that revolutionary left-wing nationalism of the Taller de Gráfica Popular (TGP).“
Carlos Guevara Mesa, art critic.

“Sánchez Santamaría and Elizabeth Catlett, have engaged in constant interventions with the sociopolitical and cultural local context of many regions; and, as conscious producers of memories, aware of their voices, have manifested their collective capacities to reclaim their existence. Acquiring the designation of La Tercera Raíz, the third root”
Raúl Ferrera-Balanquet, author and art critic.

“I was always attracted to Sergio’s mastery of the craft, his ability to create mood, movement, light, darkness, tensions, emotions. A mastery not seen since the days of Posada or Leopoldo Méndez.”
José Calle, collector.

“Sergio is as passionate for printmaking as he is to make poetry with it.”
Steven Campbell, artistic director Land Fall Press.

“I definitely consider him to be one of the outstanding printmakers alive today!”
Bill Fick, artist and printmaker.

“Alluding to the famous phrase of the great José Clemente Orozco: ‘If I hadn’t been an engraver I would have wanted to be an engraver.’“
Sergio Sánchez Santamaría